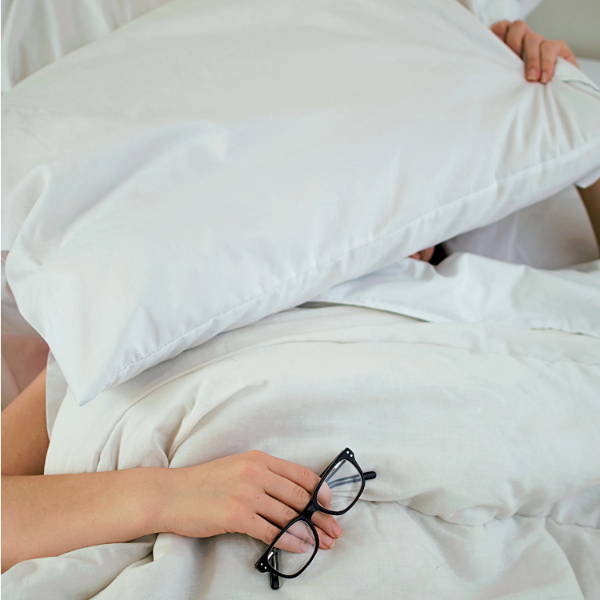 If you feel like you’re losing sleep over menopause, you’re not alone. When people hit a certain age (usually the mid-to-late 40s, though perimenopause can begin as early as the mid-30s and, if medically induced, at any age), the looming spectre of menopause starts to impact lots of areas of life, which can — and often does — include the quality (and quantity!) of sleep you get each night. So, how — and why — exactly does menopause affect sleep? Let’s explore.

Am I crazy? Is Menopause Really Messing With My Sleep?

When people reach the age range typically associated with the onset of perimenopause, their risk of sleep-related issues skyrockets. Seriously — the numbers don’t lie. Some studies have found that, on average, 12 percent of respondents experience sleep disruptions, but when you narrow down from “everyone” to “folks in their late-40s to early 50s,” that percentage jumps to 40 percent. Most experts believe the hormonal changes our bodies undergo during perimenopause and menopause are behind the spike.

What Sleep Issues Does Menopause Cause?

Those across each menopausal stage complain about a variety of sleep issues, including difficulty falling asleep, frequent awakening and/or difficulty falling back to sleep, and/or early morning awakening, aka insomnia. Sleep-disordered breathing, the most common being obstructive sleep apnea, and restless leg syndrome, are less common. Let’s examine some of the more common (and directly menopause-related) issues in more depth.

Just like the name suggests, hot flashes are sudden (and unpredictable) periods of feeling hot all over the body. They can be accompanied by sweating and typically last anywhere from 30 seconds to five minutes. Hot flashes are one of the most common symptoms of menopause, affecting about 85% of respondents. Unsurprisingly, when hot flashes hit during the middle of the night, they often lead to unexpected awakening and can contribute to insomnia struggles. In fact, more than 80% of perimenopausal and postmenopausal people who experience severe hot flashes also experience symptoms of chronic insomnia.

Hot flashes aren’t the only factor in the link between menopause and insomnia though. Insomnia, which is marked by an inability to fall asleep, stay asleep, or a chronic struggle with restless sleep, can be a serious issue. Insomnia leads to sleep deprivation, which increases risk of anxiety and irritability, hurts your ability to focus, impairs memory, and leads to physical side effects like headaches.

Many people who will experience menopause already struggle with chronic insomnia at disproportionate rates to men, even before menopause becomes a factor; while one out of every seven adults suffers from insomnia, that number basically doubles to one in four among women and the risk just increases as we age, with some studies suggesting that as many as 61% of postmenopausal women deal with insomnia symptoms.

So why do we experience insomnia at greater rates during and after menopause? Once again, it comes down to hormones. Progesterone is a natural sleep inducer, known to have a natural hypnotic effect that aids in sleep. During perimenopause and menopause, production of progesterone drops significantly, and by the time people enter post-menopause, low levels of the hormone may be one of the biggest factors contributing to increased rates of insomnia.

And, while we know progesterone can have mildly sedating effect and has been reported to improve sleep for some perimenopausal and menopausal folks taking progesterone (especially micronized progesterone), both estrogen and progesterone play a role in sleep disturbances, and the current thought is not that progesterone plays more of a role than estrogen. It’s important to discuss any sleep-related concerns with your healthcare provider to suss out what’s what and get help if needed. It’s also important to understand that sleep is complex and can be impacted by a multitude of factors — not just hormones.

As we go through the stages of menopause, our risk of respiratory sleep disorders like sleep apnea also increases. Sleep apnea occurs when someone stops and starts breathing repeatedly during sleep, and it’s frequently caused by throat muscles relaxing. Estrogen and progesterone, both of which decrease during menopause, have been shown to play a role in maintaining the health and tone of the smooth muscle in the airway, which is just one reason this system can get out of whack.

Restless legs syndrome (RLS) is a condition that causes an uncontrollable urge to move your legs, usually because of an uncomfortable sensation. It typically happens in the evening or nighttime hours when you’re sitting or lying down. Moving eases the unpleasant feeling temporarily. It can begin at any age and generally worsens as you age. Both of these have a loose at best relationship to hormones. I’d focus more on being aware that insomnia’s not the only game in town and sleep issues are not all treated in the same way. So — check in with your provider if you’re struggling with sleep.

The most important things to remember about sleep challenges during menopause:

An action plan for better sleep during perimenopause:

The information provided on StateOfMenopause.com is not intended and should not be construed as medical advice, treatment, or diagnosis. Always seek the guidance of a qualified healthcare provider with any questions or concerns regarding your health.

Your cart is currently empty.
Click here to continue shopping.
Search
Thanks for contacting us! We'll get back to you as soon as possible. Thanks for subscribing Thanks! We will notify you when it becomes available! The max number of items have already been added There is only one item left to add to the cart There are only [num_items] items left to add to the cart